Fewer Americans are moving for work than ever

Fewer Americans are moving for work than ever

Location is everything—except, it seems, when it comes to employment. In a recent article on CBSNews.com, the number of Americans relocating for a new job ha 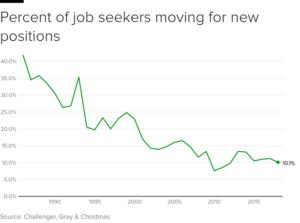 s dwindled during the last decade, a significant change from the late 1980s when more than a third of job seekers were willing to pick up and move for employment.

Over the past decade, 11 percent of job seekers relocated for work, compared to nearly 19 percent who relocated for greener employment pastures in the prior decade, according to findings from Challenger, Gray & Christmas.

Offerpad Partners with Bellhops to Strengthen Its Free-Move Benefit